My Bro May Be Older Than Me…

But, dang, he has great eyes!  I think all three of my brothers are far sighted.  I’m so nearsighted I put my glasses on as soon as I get up and don’t take them off, except to wipe the sweat off my face, until I go to bed at night. 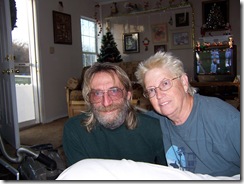 I tried to crop the photo in closer, but it is one off my old laptop and the windows photo program won’t do it for me.  And I haven’t installed anything else to try…

But back to my story.  My middle brother and I have a lot in common besides our parents.  We both love flowers. Bro spotted a flower yesterday on a vine growing up a dead tree out back. 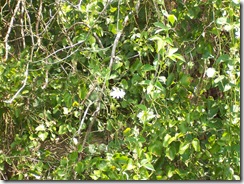 If I knew how to draw an arrow I’d point to the white flowers in the middle of the photo.  The dead tree that the vine with the flowers was growing up into is behind the back fence and there is poison ivy all around.  He is highly allergic and I told him that I’d put on my old jeans and boots and weedeat my way in to locate the base of the vine and clear out around it to possibly dig it  up and replant it where it would be safer to enjoy  and I was going to do that tomorrow. 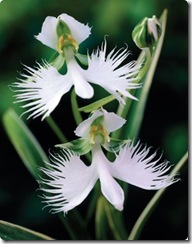 Bro thought it my be an egret flower.  These egret flowers look somewhat like their name and Bro had purchased them for me this past spring.  I planted them but as to date we’ve not even seen a sign of them. 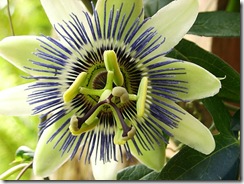 There are passifloras in many colors.  They are an absolutely beautiful flower and I’ve tried once before to try to raise one when we lived farther north in Bartlesville, OK, and didn’t have any luck.

My Bro is, if nothing else, not afraid to admit when he’s wrong…at least to me… and I’d be the first to say that about flowers he is rarely wrong.  He went out to smoke late this afternoon and came back in and handed me this flower… 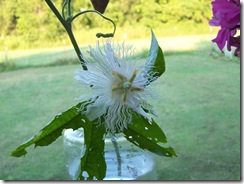 with a big smile, ‘cause he knew I was right and he also knew that as far as plants and flowers I’m not often right.  And that it was more important to him to figure out what the flower was rather than to be right. He spotted another vine that wasn’t so deep into the brushy, poison ivy laden area, broke off a piece of vine with a bloom on it and brought it in to me.

I love my Bro.

Posted by Reddirt Woman at 9:20 PM

Those flowers - especially the egret flowers - are GORGEOUS! You have a whole different set of cool flora in your neck of the woods.

Maybe we could do a little exchange if you get the egrets going? I wonder if we have anything up here you don't have...

absolutely beautiful flowers!! you aren't going to believe this I took a picture today of the passifloras at my sisters house. I was over taking care of the baby mama, tiny newborn baby and 4 year old emoree. I saw them out the window and took off LOL I didnt' know what they were till I read your post. GREAT minds!! I want a cutting of that Egret flower and have my mama stick it in the ground so when you come down.. bring it..LOL
I still tease my sister I don't have glasses (yet) and she makes me read the phone book and pill bottles everytime to prove it to her..

Great Picture of you and your brother by the way :-))

wow so what is your gardening zone? I thought the the passion flower vine could only grown in fairly temperate climates. You are near Oklahoma City right? The last time I was down there they had just had one heck of an ice storm Ours grow ok but we have to protect them in the winter and they all die off when we have extreme winters (along with hardy bananas, palm trees, etc).

I know your nearsighted pain!! I have to put mine on to find the bathroom at night-don't want to miss the door and use the closet :) haha

Your brother is sooooooo nice :) both to bring you a nice flower and admit he was wrong. and risk poison ivy on top of it all!

I would love to have flower conversations with my brother. We both have a passion for gardening but sadly..all the other disagreed upon stuff keeps us from talking about what we have in common.

You are one lucky sister!!

We have passion flowers here but I have never seen an Egret flower before. It's exquisite! Where can I buy one?
You and your bro look alike. You do! Love the photo of you guys.

Love those flowers. . . and isn't it great to have a brother who loves you enough to let you be right sometime?

I love my two brothers! They rock my world!

I love the pic of you two! Your brother is a sweetheart to go out and pick that gorgeous flower just so you could be right...;p

Howdy
What a great Brother you have.
The flower is just gorgeous !
What an amazing discovery to find.
I am so glad he spotted it and you shared the photo !
Thank you for posting all the photos.
Have an awesome rest of the day.
Happy Trails

Mary Ellen... I don't know if they will come up in spring or not, but if they do after I do the happy dance if they are big enough to share I would. I'll find out who Bro ordered them from and let you know.

Dar talk about timing. I always thought it amazing when I'd post something and then go read other posts and there would be something similar on at least one...The photo was taken last year after Thanksgiving when we were dcorating for Christmas. He's cut off his hair since it got so hot. He may get up and shave the fur off his face or just leave the mustash... He likes to change. The knee is achy but I did a lot yesterday and this morning. I'm resting it for a bit then I have to run to town. It still won't let me crawl around on it, but that will take a day or two I think.

Tina We are south and east of OKC and Norman. My zone is 7 or 7a, but I've had some luck with calla lilies that are for zone 8 or further south. Passifloras that I've looked at in the catalogues usually say zone 5-8 or 9. I did find when I googled that there are natives in the s.e. part of the U.S. and are called Maypops. Google them, it's real interesting.

M.E. and Farmlady... The place that Bro got the egret flowers is VanBourgondien Bulbs. If you google egret flowers there are several sites that will come up. You might want to read about how to grow... from what I read yesterday before I posted you need a bit more knowledge and some luck. I'm really anxious to see if they come up.

PS, all three of my brothers are great... great ornery senses of humor although my oldest brother has a bit more of a dry humor... he can keep up the rest of us for sure in quick comebacks. i love all three of them and my sister, too.

JoJo I am thankful that he acknowledges when I'm right. Our dad found that difficult to admit and when we were right he'd usually just shut up about whatever it was, so it is nice to be told I'm right and vice versa. Terry I'm learning from my brother to look up and see stuff around me. I'm so used to looking at the ground when I walk to try to avoid falling on my face (or knee) that I sometimes forget to stop and just look. I don't need to always be going full tilt. I miss things when I do that.

You can tell that you DO love your brother...GREAT! I liked the white egret flowers, I have not seen them before...Cool! Hope today brings you with a healthier knee...Have a great weekend...

Hi, Margaret, I will consider it healed when I can crawl on it at least in the garden where the dirt is softer, but every day that I get through without doing something else to my knee is a step in the right direction.

That is the most EXQUISITE flower, Sass!! I thought it was an orchid. So it's in the passion vine family? I have the one you showed growing in my backyard - the purplish one but I have NEVER seen that white one. How EXCITING it is that it came up!

Now, don't go rootin' around and fallin' over stuff just to get to more!!!!! I love the flowers you always send us!

he is adorable and the flowers are beautiful what a wonderful brother!

Yep-Bros are good to have around :)

Yep-Bros are good to have around :)

They are very pretty. Especially that egret flower. Never heard of it before. It's so dainty.
But I'll bet not a one of them is as pretty as the smile on your face when your brother handed you that flower.

Robynn I was excited that it was pure white. All of them that I've seen at the nurseries and in the catalogues were all sorts of colors but I don't think I had seen a pure white and heaven knows we could use something around the plantation that is pure...

Laura, he has his moments. And like everybody else there are times you want to pinch his nose and vice versa, but the love in our family runs deep.

Tipper, he's not good for much but he's a heck of a cook and he's a great help with the flowers. I'll be going out and taking more corn pics today.

Becky you are so right. Carol wished she had had the camera for the smile that busted out on my face when I saw that beauty... and then realized that, yes, I was right.