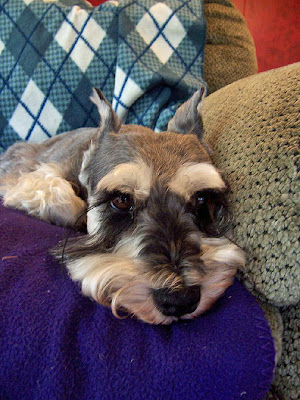 She's not feeling real pert but at least she is home and not in a cage. She's in pretty rough shape but is on 2 types of antibiotics, a steroid, an anti- diarrhea med, an anti-nausea med and one for pain if needed. In other words they don't know what went wrong with my girl. They figure if you throw enough meds at it whatever it is, it will go away. I don't know how it will end with this round and expecting it could go either way but it gives mom a chance to get her mind ready for what ever is to come.

In the meantime you all get your preparations for Christmas done so you can be sure to have time for hugs and to tell your families that you love each and every one, including the 4 legged babies because we never know for sure how long we are going to be of this world...
Posted by Reddirt Woman at 10:59 PM 8 comments:

First off, the liver enzymes are playing wreak havoc again. Not as bad as they were, but they have gone back up somewhat from last month. The good news is, that while the doc didn't take me off the steroids, he did increase the Imuran, the med that I'll be taking from now on I guess. I wasn't surprised that the blood test wasn't as good as last month because of how I'd been feeling. I guess I am learning to listen to my body at least a little bit.

My Chloe, my oldest girl, is at the vet's and has been since Tuesday. I'm very worried about her. She ran fever and refused to eat Monday evening and when she refused her breakfast Tuesday I decided that it was time to take her to the doctor. Her white blood count was up which could be an infection of some sort or it could be cancer. They took x-rays and didn't see any obvious mass anywhere but it could be hiding behind her organs. I talked with them yesterday about ultra sound and when the doc brought it up I asked what it would cost... about $300. Told them no, I couldn't afford that and if they did find anything I couldn't afford to have them do surgery or chemo. She will be 12 on the 1st of January and she has had a good life and what I needed them to do was try and get her re hydrated and feeling better if possible but if not then God needed a good pup in heaven. So needless to say I've been in bad shape about her. I'll let you know the outcome with Chloe.

Thanks for checking up on me. I'm going to close now for this post. Say a little prayer for my girl, if you would.

Thanks.
Posted by Reddirt Woman at 8:39 AM 6 comments:

I'm just aggravated. A couple of days after my last post (back in the dark ages) I sat down to write about whatever had crossed my mind at the time and set my hands over the keyboard to start typing and my hands, especially my left hand, were shaking like I was palsied. It was so bad that I had to grab it with my right hand and slap it around and fuss at it. I went ahead and tried to type with it and the words were coming out like sasalleee[op (sleep) or ggoeoffyy (goofy). Needless to say, I got p.o.'d and said to heck with it and hadn't written anything longer than replies to e-mails and only when necessary at that. I know that the tremblies are medicine related and I also know now that they are worse when I've done stuff with my arms and hands like painting the walls of the kitchen, which I did, and the muscles are tired. To me, at the time however, it was one more sign of "aging" and you all know that I refuse to even think about aging or my body betraying me by getting more "feeble". I'm too young for feeble to even enter the equation.

Other than the above I can't fuss about too much. I did get the kitchen repainted, including the woodwork, in time for Thanksgiving, and after Thanksgiving lunch at our house I drove to Ft. Worth to my brother and s.i.l.'s and visited with them and had Thanksgiving again on Sunday evening and came home on Monday. Last Sunday I drove to my nephew's home, about two hours from where I live, to stay with him for a few days after his knee replacement surgery. His wife just started her new job at a college about 3 months ago and with the jobs and economy the way it has been she didn't want to take a chance with her job because she really loves it so I went on Sunday and helped him out with keeping him supplied with liquids and lunch and whatever else he needed and then came home on Thursday evening. Tuesday and Wednesday we had thunderstorms, yes Virginia, thunderstorms in December, and when you live in the country and have to depend on satellite for your t.v. and internet you know if it rains you are going to be without t.v. and internet. I found I need to load some games to play that don't require me being on the internet. Usually I pack a book or two and a couple of magazines when I go anywhere for overnight but for some reason I failed to do that this trip so I was looking for things to do when I got bored with the games that come on the computer.

Next up is Christmas. Carol has been cooking already. She loves Christmas and loves baking for Christmas. I love Christmas, too, and I love eating most all of what she bakes. So far she has made pumpkin bread, banana nut bread, eggnog bread and apple cake with cinnamon icing. Fudge and baked fudge, butterscotch haystacks, Hidden Valley oyster crackers and Texas Trash or ChexMix to some folks. For her sister's birthday tomorrow she is making cowboy caviar, Christmas layered jello, green chili cheese grits, grilled chicken and talapia, asparagus and mushroom casserole, green chili spoon bread and bread pudding. Later she will be making peanut brittle, peanut butter fudge and chocolate covered pretzels. Dang, I'm gaining weight just typing all this.

So that's what's on the near horizon around here. I imagine there will be some cookies made and anything else that catches Carol's eye as she is going through her recipes. So if I go anywhere between now and Christmas they will probably have to roll me out of the house on a dolly. Just call me Porky.

I go Monday for blood work and then see my GI on Tuesday to find out where we are on my journey with my liver. I'm not even going to speculate on it, just think positive that I can finally get off the damn steroids. I will let you know. I won't leave you all hanging on this... if I can waddle to the computer after eating everything this weekend.

Have a great weekend and get all your Christmas shopping done so you can start on your Christmas cooking. I'll catch you all later.
Posted by Reddirt Woman at 8:57 AM 5 comments: