I have been on a tighter than usual budget because of car repair expenses so when I got my hair cut last week most of the blonde was cut off.  I didn't think much of anything about it until today.  I took Carol to the doctor (in the wheelchair van that has been giving us some problems) and after she was finished with her appointment we decided to splurge and went to McAllister's and split a baked potato with everything but sour cream (I don't do sour cream) and a wonderful chef salad.  Had a nice leisurely lunch/supper then headed back out to the van to come home.  It decided that it didn't want to start.  It has done this several times in the last 3 months but has been running good for the last couple of weeks after our bad gas episode.  Anyway, after giving the old van a half hour to contemplate how bad I was going to cuss it out if she didn't start, I had Carol call her sister to come get her and I called AAA.  I don't know if I've told you all how thankful I am to have AAA but I've been a member since 1969 if that give you a clue.  I've had to have either my little pickup or the van towed four times just in the last two months and there has never been any extra charge.

But I digress, as I often do, even more often as I get older... ahhhumm... back on track now. I sat outside on the patio, in the shade, at McAllister's and waited for the tow truck to show up. About 5:30 the truck pulled up and the driver gets out and asked what was wrong.  Me, "It won't start."  He, "What does it do?". Me, "It turns over and tries to start but then doesn't."  Okay says he, let's give it a try.  I said it will probably start for you... and sure enough it started right up!  He kind of gave me that raised eyebrow look that we all hate to get and I apologized just short of profusely and he patted my arm and said it's okay like you would say to a little old blue-hair that had run over your toe with her wheelchair...

I'm going next week to get my hair bleached back to blonde.  I would rather be thought of as a ditsy blonde than a little old lady that doesn't know how to get her flippin' car started.  The worst thing about getting old is, well, getting old.
Posted by Reddirt Woman at 6:42 PM 10 comments: 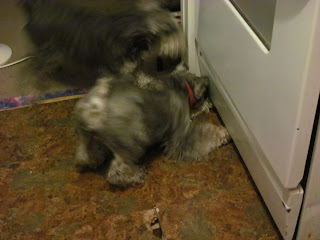 Schnauzers in attack mode thinking they have a cat trapped under the stove... they don't. And, yes, that is a hole in the floor but it's not near big enough for a cat... to come in or go out. 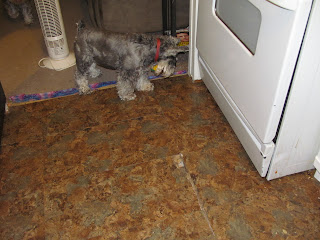 SueSue still not convinced that damn cat isn't under the stove... right here, mom... even after I moved the stove so she could see that it was not back there. 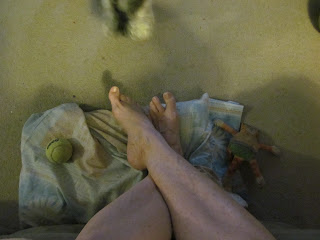 I was reading some of the blogs I visit and had just commented when SueSue wants to play she usually starts with bringing me a ball.  If I don't stop and play she will bring something else and drop on my foot... usually the mean kitty that she likes to play tug with and about that time I felt mean kitty being dropped on my foot. Had to take a picture and share.  I didn't move my feet because I was afraid the ball would roll off the pillow.

If that is all that it takes to inspire me to post something I need to be posting more often.  (Laughing at my own self because it takes so little to entertain me sometimes.)
Posted by Reddirt Woman at 7:58 PM 8 comments:

I'm going to get on my horse about bras.  They flat make me crazy.  My insanity began many, many years ago when I was just a flat chested kid.  Not just an ordinary flat chested young girl but one that was so flat chested it looked like I'd been steam rolled.  I used to fret about it some especially in senior high and girl's locker room and showers but when I looked at my older sister and my mom, I pretty much figured my lot in life, padded bras.  Then someone told me if I could find a bra that wasn't padded that fit my little ones would have room to grow. I was naive, I was gullible and I grabbed at that little ray of hope.

I was 21 years old.  I walked into the lingerie department of one of the nicest department stores in Okla. City and knew I was in trouble when the matronly and proper looking saleslady approached me and said, "May I help you sir?".  True story.  I sucked it up and explained my mission, all the while watching the doubt grow in her eyes.  She gamely took me to a fitting room, took a few (very few) measurements and excused herself to go find brassieres for me to try on. When she returned she brought several styles for me to try on and we began.  They all fit well around my chest but when it came to cups... sigh... all of them you could have rolled up and pinned the extra fabric. After trying the different styles she graciously suggested I might want to try the juniors department, that they might have something for young teens, i.e. training bras.  Which by the way is such a dumb term,  I mean, you have to train those puppies?  Don't they just grow into their own?  You have to smack those babies around and tell them you go to the left and you go to the right... seems kind of silly to have to "train" them.  I walked out of the store and bought tank tops for my underwear.

But, once again, I digress from my original gripe. I went through the first 60 years of my life not needing to worry about a bra but 40 pounds and 2 inches shorter, I was told, "Aunt Helen, you really need to buy a bra."  Ask not for whom the bell tolls... it tolls for me.  My simple life was about to get very complicated and frustrating.

Okay, I'll compromise.  I'll wear a bra when I go to Ft. Worth to church and out to eat and to weddings and such so I don't embarrass anyone with heading south boom-booms that you can almost tell are boom-booms. So I go bra shopping, this time at WalMart.  Forget that high dollar stuff at the nicer stores. I found a couple to try that I could fasten in front of me and then swing them around and put my arms in the straps and pull them up into place.  I found jog bras that looked like they might be comfortable but it was like trying to put on a girdle if you stepped into it and pulled it up into place. I had flashes of someone trying to hang me from the nearest tree when I tried putting it on over my head.  My shoulders and my elbows prevent me from reaching behind and fastening a bra the normal way without pain, one of those aging things. Why can't you find bras that fasten in the front?  I understand that when some fellow invented the brassiere that ladies had dressers and undressers.  I had a few of the undressers in my life and have been an undresser in my life, but no way have I ever had a dresser.  I found two bras that closed in the front... minimum cup size C.  Forget that!  I'm not rolling up the cups and pinning them either.

Since I have a couple of visits and a wedding looming in the future the search shall continue.  I may even have to go to a higher end store that has a legitimate lingerie department... hell, I may even go to a Victoria's Secret
Posted by Reddirt Woman at 1:32 PM 389 comments: