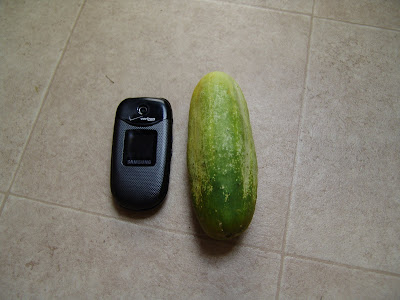 The first cucumber... and I didn't find it. Carol was out in the yard and she checked out the vines and found this fat little guy. Being the size queen that I am you know I have to put something in the photo for you to be able to get an idea of the size hence the cellphone. Carol is cutting it up for salad so I will be able to give you a report on it's tastiness. This came off the 'bad day' vine which is probably triple the size of the good day vines now. I tried to make sure they were both getting the same amount of water but the only thing I can figure is I misfigured on that facet of their growing. We had 21 consecutive days of 100 F. heat or higher, only getting broken yesterday when we, thank God, got about 2 inches of rain. It has been hard getting water to everything on a daily basis. I have felt so punk that Carol has had to do the major portion of the yard with the exception of the garden and I have managed to go out and set the sprinkler and move it periodically. I've done some of the weeding and grass pulling but Carol has done a whole lot more and from her wheelchair... makes me feel pretty useless some days.

My liver biopsy has been scheduled. I'll go in on the 19th for the biopsy. I don't know how long it will be before I get results but I don't imagine more than a day or two. It's amazing what the medical people are capable of doing nowadays and I So know my GI is as anxious as I am to get this resolved. I don't think it's because I asked him where my kiss was before my colonoscopy... He told his nurse that was her job. You should have seen the look on her face before I cracked up. I just told him when I was there for my blood test results that I was ready to find out what was going on and he said, "So am I", so I know he's concerned and wants to get to the bottom of this liver business.

So you all know as much as I know now and it's all just a matter of hurry up and wait... but that's okay because I know you all are supporting me and standing with me. I can't tell you how much that means to me, nor can I thank you enough.
Posted by Reddirt Woman at 6:39 PM

Nothing is quite as tasty as the first fruits of the garden.

Will be thinking good thoughts for your biopsy results!

That baby does look delicious, so let us know what you think...
Now as far as this liver stuff. I need to read further, and if I don't find the answers, you owe me a message or sumthin'....got it, girlfriend? ;)

I haven't been blogging much lately, but I swear there isn't a day go by that I don't try to - or want to - or attempt to. But something always gets in the way, and it's driving me bonkers!

hey you...it's gonna be o.k.,...trust me cause I've got the prayers going upstairs for you! love you Helen.

Sending you good thoughts and cyber wishes for your biopsy. Now I can't wait to find out what's going on too! Nice cuke! Mine are still really tiny, but my zucchinis are huge!

Yep..it's all going to be fine. Jojo and I and you other buddies are johnny on the spot here.

Your cucumber is beautiful. Unfortunately I tried to eat a cuke sammich and it tore my tummy up. I love em. They don't love me. I'd rather not look at one now.

I'm sure Carol understands and is more than happy to do what you can't do right now.

We have a break in the heat, only to have it returning with a vengeance on Monday. Gah.

From one antique to another, much good luck on the bi-op.

Love me some cucumbers. I've not been getting many just yet and when I do get one I have to fight myself to not peel and eat it immediately. I usually lose and peel away.
Got you in my prayers. I'm hoping all turns out well with the biopsy!!!

It's a different feeling having the first fruit at your backyard. And it's the cucumber to be exact. We all love cucumbers! So exciting!