The Rest On Daddy’s Side… 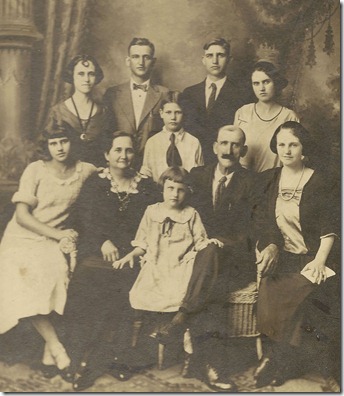 When I left off on the last family post I had told you all about the top row and the first person on the left that was seated.  That was my Aunt Sally.  Next to her was her momma… Mammy Gardner.  I don’t know much of anything about Mammy.  She died the summer after I was born.  I do know, after knowing my daddy and  all my daddy’s siblings that Mammy must have had the patience of a saint.

The young man standing by Mammy is my Uncle Bob.  He was the next to the youngest and the youngest boy.  He and my Aunt Margaret, his second wife lived, in south Okla. City.  The first time that I remember saying I would spend the night at their house, I got to crying and wanting to go home… “I want my daddy!”.  They tried as best they could to calm me and my fears but ended up calling my daddy to come get me.  He drove across town and picked me up.  I was probably asleep before I got home. They got to do a lot of teasing after that about me having a ‘baby’ attack and being afraid to stay the night.  I was probably about four.

Sitting in front of him, next to Mammy, was my Aunt Mary. She, like all the rest of them, had a pretty good sense of ornery.  You get the bunch together and there would be stories on her brothers and sisters.  She had a hearty laugh and I think her biggest heartbreak was not being able to have a child.  She and her first husband, my Uncle Bruce, were crazy about each other.  They thought they were going to have a baby but it turned out to be a tumor.  A full hysterectomy followed.  Thankfully it was a benign tumor.  My Uncle Bruce kind of made me feel like his favorite, he called me booble dooble, kind of like Double Bubble bubble gum.  He and my Aunt Mary were visiting at our home when I was about 8 or 9 and he had a massive heart attack and died on our side porch.  There was a heart doctor that lived across the street and down a lot from us and someone went and got him but there was not the technology in the early Fifties that there is now and there was nothing that he was able to do for my Uncle Bruce.  The last thing he told Aunt Mary was to take care of their cat, a big old yellow tabby.  Aunt Mary did fall in love again, many years later, and lived the rest of her life in Tennessee.

Papa Bill Gardner is next on the roll call…  He, to me, was a very gentle man.  I remember Aunt Annie shaving him with a straight razor… it fascinated me to watch and she didn’t ever nick him.  He had a mustache and had to use a cane to walk very much.  I was probably only four or maybe five when he passed away.

Last, but definitely not least was my Aunt Fanny.  Aunt Fan was married to my Uncle Ed West and they lived in Tennessee.  Aunt Fanny was full of fun and a little popcorn fart of a woman and Uncle Ed wasn’t much bigger. Uncle Ed was a perfect match for her.  He was ornery as all get out, loved to tease and would pinch a plug out of you and just laugh.  I loved going to their home for reunions.  They lived in the country and they had a colored man (that’s what they called them back in the day) whose family had worked for Uncle Ed’s family and when the slaves were freed Ed Stone’s family stayed on and worked the farm and both Eds grew up around each other.  Ed Stone smoked the best Tennessee ham I ever ate.  We all looked forward to breakfast more than any other meal, and we had some good meals, because Aunt Fan or Annie or Addie or mom would be in the kitchen frying up ham and making red-eye gravy to go on our biscuits and fried eggs to go along and complete the meal.

You’ve made it through my daddy’s family with quick blurbs about my Aunts and Uncles. Next time we visit my life story we will start on my momma’s side of the family… the Texas side.  The side I loved more than the rest.  The side I identified with as a child and wanted to be like growing up… that ought to give you a bit of a clue.

Posted by Reddirt Woman at 8:38 PM

Labels: getting to know me

What an interesting bunch of people... I love your stories. (I had a cousin of my mother's age who used to call me "Bumble", short for bumble-bee of course, because she said I was always buzzing around. She continued to call me Bumble right up to the day she died, when I was in my forties.)
Caroline

what a great bunch and drooling over the breakfasts!!!

Mmmm... fried ham, red-eye gravy with biscuits and fried eggs! Oh my - has there ever been a better breakfast than that?
Living here in Oz, it's the breakfasts that I miss the most... biscuits and gravy, grits, real bacon and cured ham. *drool*

I'm lovin' the family saga, Cuz! Looking forward to the next installment.