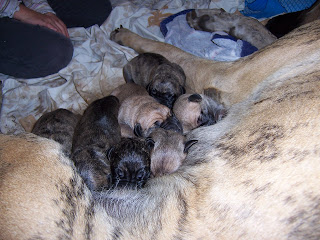 When you breed a large dog like Great Danes you usually get a large litter. Even on the first time around. There were three puppies that were lost.

Maddy had them okay and cleaned them up, but in trying to keep them warm and not having experience, she laid on them and squashed them.

After they got her inside into her wading pool she had 7 more pups, so her first litter was 10 in all. Here are the magnificent seven... There are 4 boys and 3 girls and I want them all.

During the time I was there I was answering questions and explaining what I was doing or what was going on with Maddy to a 7 year old, an almost 9 year old and adults from the early 20's to a 50 year old.

I only had to help with one pup, the last one, a little boy. His sac was broken and I realized it when I saw his little face. He was blowing bubbles out of his little nose and already trying to find something to nurse. 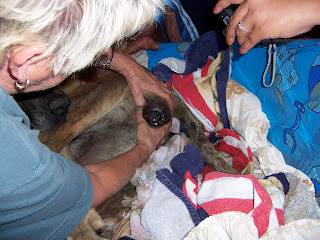 I swiped his little face and mouth to make sure he could breathe and keep him from going back in when the contraction stopped.

Another couple of contractions and I had most of him in a towel and then on the third, here he was and mom was ready to meet him.

I laid him down by her leg and it was bath time and he wriggled and fussed until she was done with his bath and he managed, finally, to find dinner. 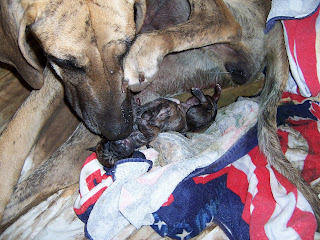 Here's mom getting to know a few of her babies and taking a well deserved, albeit short, siesta. 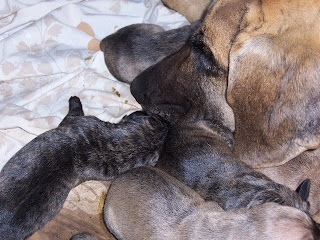 This little one crawled up between her front legs and just went to sleep.
It was so much fun. 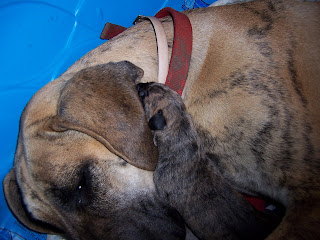 Madeline says are we done yet? And maybe you do, too, but I'm not quite there.

There is one more I want you to meet... This little guy in his wriggling around got turned over on his back, but the little bugger never let go of his teat. He was latched on big time and wasn't about to let go, upside down or not. 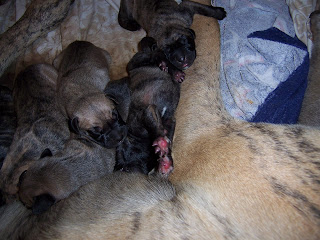 His little pink padded paws were kneading air pushing to get more milk. He was just so cute I had to introduce him to you.


Thanks for letting me brag about this experience.


And to Nancy and Steve, thanks for having faith in your old Aunt Helen. It made me feel useful and I love you all.
Posted by Reddirt Woman at 8:09 PM

Awww that's fantastic!!! I want one, I want one wahhhhh You are the best! Staying calm and cool in that situation and saving that puppy who's sack had broken...wow...I am in awe of your many skills!!

The puppy's are so cute! Mama looks tired. Love the shot of the baby sleeping on her. Soooo cute!
You are a jack of many trades. I need you around here!

I just LOVE Me some puppies. They are the cutest thing in the world. I was about 6 years old the first time I saw puppies being born. I do not get to observe that with my doggies. They have to have C Sections when they whelp. But puppies are still the cutest no matter how they come out. I look forward to more pictures as they get older.

Oh so sweet! I love puppies. What a good job you did there!! Can't wait to see pics as they get bigger!! Sweet!!

I'm going to try to go up each Sunday to take some more with 'em getting bigger, so you'll be getting to see them grow.

How cute. My wieners are fixes so no babies, but these are adorable.

HOW FREAKING ADORABLE!! I want to sniff them...

Wow! Beautiful mom adorable babies! And you got to be part of it all-amazing indeed!