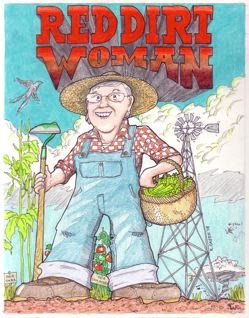 Who would not feel like "Queen For A Day" if they clicked on a blog and found something especially for them right there in living color for all the world to enjoy?

Rick does such fantastic doodles and I feel so honored to have been featured with this doodle. I don't think that I've quit smiling for 3 days, even when cooking and cleaning house, and that is some kind of achievement and testimony to probably the best surprise, ever, in my life. Be sure to stop in at Organized Doodles and check out his work. The stories that go along with his drawings are worth the trip, too.

I was thinking about odd little inventions that we often use just by rote without thinking about who thought them up in the first place and probably got stupidly rich from them. Things like rubber bands... who ever thought of rubber bands and for what reason were they invented for originally?

Well, my friends, according to Wikipedia, the innocuous little rubber band was patented by Stephen Perry Bobstein, of Australia, on March 17, 1845. Since he invented, or at least was the one to patent it, the rubber band to hold envelopes together can you imagine how overwhelmed he would be if he were transported forward to our day and time to find that there being, not only about a trillion uses for them (including shooting spitwads at people), there is a web site for the lowly rubber band.

That's right folks, a web site. So if you want to know all kinds of stuff about rubber bands, you'll find it all (or mostly) at www.therubberband.info/ . The one thing it did not tell me was whether Stephen baby amassed incredible riches out of his invention, or if he died penniless and was buried in a pauper's grave.

We are here to educate and enlighten. Our next subject will be the paper clip.
Posted by Reddirt Woman at 2:28 PM

Wow girl! You're sure giving me a lot of blog love. Thank you very much. It makes my day too to read that I made you smile - even while doing the dishes?

I've had a few pop over from your blog and said nice things on mine as well. So, the love just keeps growing and growing.

After reading the by-line on your blog header I realize that I should have added a skunk somewhere in the mix. Oh well, I missed that opportunity because the package is in the mail and in route to your red dirt residence.

I just love Rick and as owner of THREE awesome drawings I could not be happier! I love the one he did for you and cant blame you for all the smiles :)

You are so loved!!
I would be smilin' too!

Okay, I have no idea why it's taken me so long to get here; really, I'm not a "dumb" person, just slow sometimes, I guess. I've read back a little bit and I'm hooked! Especially, "tell them Helen sent you. I don't get anything, I just liked saying that." BWAHAHAHAHA!

Now, for once in my life I have to be a little bit quicker and get over an investigate Rick, who keeps popping up at lots of good friends' places. Such talent; that is incredible...and fun!

Have a good weekend, Helen!