Let Me Introduce You…

To some of the inhabitants of this wonderful place where I’m now living. 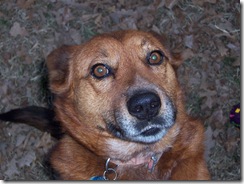 This is Lucky.  He is usually the first one to meet and greet you. 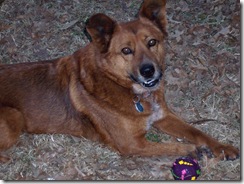 You can kind of see his shorter, smaller right front leg.  He came to the family with that leg.  Carol’s late husband came in carrying a little red fur ball that he found laying on the country road out close to where they lived. Someone had dumped him because of his deformity he thought. Anyway he was “Lucky” that Butch found him. 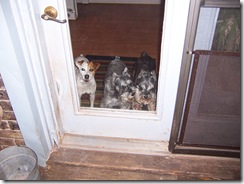 Here is a shot of what is fast becoming the “three musketeers”.  Spud, SueSue and Chloe. Actually it’s more Spud and SueSue.  Chloe is more content to hang around the house with my Cuz and myself… us old ladies. Of course if I’m out and about she wants to be right there with me. 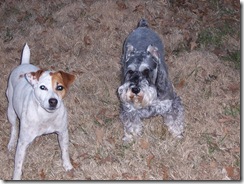 Here is the duo. They are probably waiting for me to throw the ball.  Spud is crazier about chasin’ a ball even more than Suess.  I never thought I’d see another dog more crazy about a ball than my baby girl. 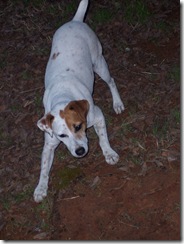 He is just so funny about it.  He will lay the ball down and then crouch down in a ready to run mode… and glance up to make sure you know he is waiting on you to pick it up and throw it then go back to the ball stare down. 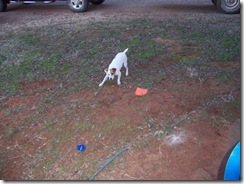 You can see him assuming the “on the ready mode” just waiting for you to pull the trigger and throw the ball. 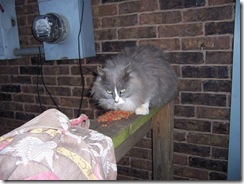 Meet Fluffy.  He is the resident cat.  He lives outside but he is not a feral cat.  He loves to be loved on but we are having a bit of difficulty convincing SueSue and Chloe that he belongs here.   They got used to chasing the cats that wandered in on the ponderosa when we lived out south and east of Noble. We have had several introductions with me holding one or the other of the girls in my arms, petting Fluffy with one hand, then sticking it up to their nose so they could smell him, all the while telling them that Fluffy was a baby (not) and you DO NOT HURT THE BABY.  Yes I lied to my girls but they understand about BABIES and that they are not to hurt them.  It just takes a little reinforcing to remind them of  that sometimes.

Yesterday I was out on the porch and Fluffy was on the bench and I was petting him and telling the girls what a good baby boy he was and he was walking back and forth rubbing my leg.  Chloe got to sniff his butt so she is now pretty much disinterested and Fluffy and Suess sniffed noses and all was well with the world for that moment.  As long as I’m there.  And as long as Fluff doesn’t decide to jump off the railing or the bench… then the chase is on once again.  At least with SueSue… but then you all know how she loves to play chase. 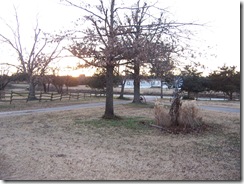 I  took this off the front porch toward the setting sun.  And I’m tired so I’m closing for tonight.  The barometric changes with this front rolling in are doing a job on the fibro today.  Bro and I will go to Ft. Worth tomorrow instead of Thursday so I don’t know if I’ll get photos of the guinea hens that stay around here or of some of the cattle that graze in the pasture behind the house and on down the road but that will give me something else to work on after I get back.  I’m still working on my favorite Christmas post so I will have at least one more post before I wish you all a Merry Christmas.

I hope you have all your shopping done and I know most of you will be getting ready to start cooking the Christmas dinner unless you are as lucky as I am and people know that I’m not a good cook so I just get to taste and make sure things are good.  Hang in… I’ll be back.

Posted by Reddirt Woman at 9:36 PM

Great post! Loved meeting all the furry critters at your house. I am not cooking anything this year either. My daughter offered to do it and I think that is the nicest Christmas present she could give me! Merry Christmas, Helen!

Love all the critters! We are going to my Dad and Moms. Merry Christmas!

well, Hello to your menagerie! So glad to hear all the girls (including you) are behaving...;p

I am so, so pleased that you are settled and well in your new place. What a wonderful warm place it sounds like too....right up your alley with all the animals about too!! I loved all the photos...that Spud is a character:)
Have the most wonderful Christmas xx

Lucky is adorable, as are all the others. And yes, he is Lucky.
Poor kitty must feel invaded. That is unless, she's happy to have someone to tease. Which seems to be a favorite pass time of cats.
Glad to hear you are settling well. And things are going better for you!!!

Gosh Helen,
You have some really good friends there! I do love those doggies!

The kitty is okay too. I think they are pretty just love the doggies best!

look at those adorable babies...all of them. Nice shots and hope the weather is holding out for ya'll in Fort Worth, my friend is trying to get there from here too!